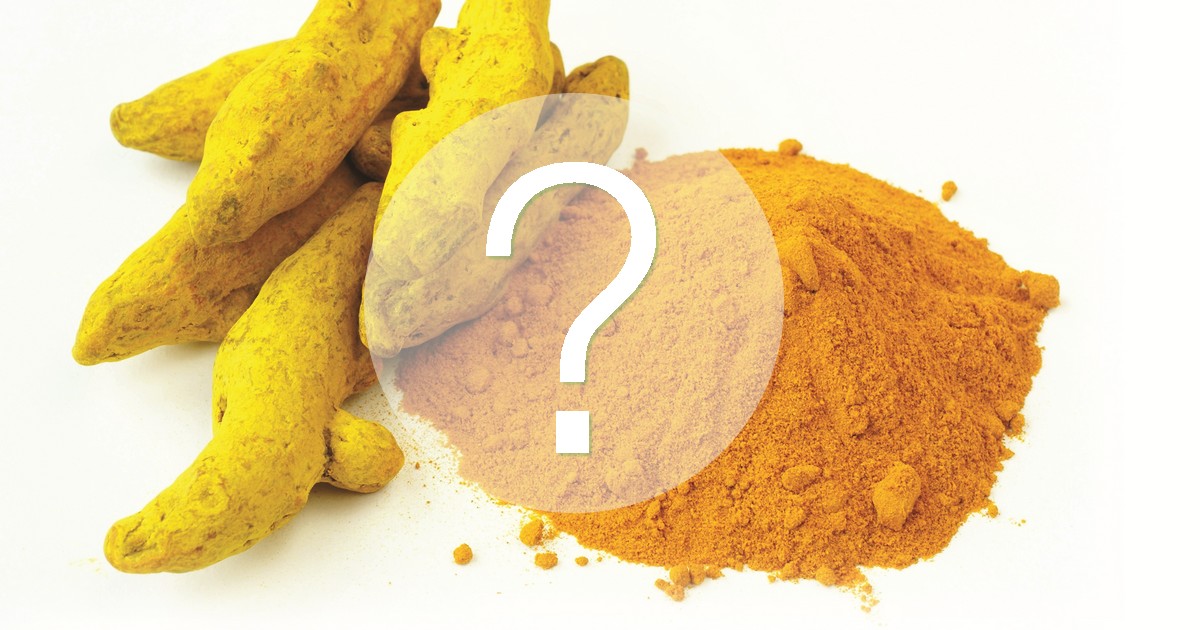 Several Member States in EU are reworking the list in the Novel Food catalogue. Even if we - at BECARRE Natural - believe that the situation sometimes goes beyond the initial need of Novel Food – to be able to demonstrate the food safety of a plant or a plant extract – it is clear that this creates questions for our market.

Indeed, it is often not easy to demonstrate that the current extract is in every way similar to the extract present on the market before May 1997, and – what is more – sold in significant quantities (but compared to what period ? : the size of the food supplement market in 1997 had nothing to do with that of 2022).

After the first alerts that led to a reduction in the intake of Turmeric longa extract (to 210 mg, ie. 3mg / kg of body weight referring to JECFA – even though many toxicity studies have demonstrated safety at much higher doses), we see new twists and turns since and especially in June 2022 with several texts including from France (see the text from Anses below) and Italy.  Several texts point out that anyprocess that improves solubility or bioavailability could, however, be subject to the Novel Foods Regulation.  Indeed, improving bio-availability generally means also changing its chemical form and/or pharmacokinetics, and thus entering into the status of new food for which food safety must be redemonstrated, as well as the acceptable daily intake.

Thus, only 95% grades of Curcuminoids, extracted from the rhizome of Curcuma longa L., were used in or as a dietary supplement before May 15, 1997. Already present on the European market with C3 Complex®, this extract of Curcuma longa was already clearly described, as well as its composition in curcuminoids whose main constituents are curcumin, demethoxycurcumin and bisdethoxycurcumin. Sabinsa had also filed European patents for its C3 Complex® as early as 1996, and invoices confirmed sales in Europe prior to may 1997, alone or with BioPerine®.

You will find further in this text information on the C3 Complex®, its studies, its history of use, as well as on our new C3 Reduct® extract (providing directly the active metabolites of curcumoinoids, what allows you to move away from the myth of bioavailability), accepted in Novel Food catalogue on June 21, 2022 at 140mg.

This history of use is important, and the Italian authorities also reminded last month that plant preparations and extracts derived from Curcuma longa ‘must present a significant history of consumption on the basis of data collected by the operator’.

It should be noted that the history is not protected: thus, the history of use (before 05/1997) concerns all the extracts of Curcuma longa, providing 95% curcuminoides, and for which the description (ie. the HPLC profile of curcuminoids and other compounds) corresponds to that of the extract on the market before 05/1997, including of course the method of production (therefore, including the solvents used) - C3 Complex® kept the same process and the same description trhoughout these years.

Addendum 14/08/2022 (Italy) : The Italian authorities published on August 1, 2022 an amendment to Annex 1 of the Decree of August 10, 2018 updating the mandatory warning on the labeling of food supplements containing preparations of Turmeric species.
Warning: “In case of alterations of liver function, biliary function or gallstones, the use of the product is not recommended. Do not use during pregnancy and lactation. Do not use for prolonged periods without consulting your doctor. If you are taking any medications, you should seek the advice of your doctor. In addition, the physiological effects that can be used in Italy instead of the pending plant claims at European level for Turmeric have been removed.
Food supplements containing turmeric must comply by December 31, 2022 (updated warning on 1 August 2022, applicable by 31 December 2022 at the latest)

(Part of the publication of Synadiet (see the website) to its members on the ANSES text - Synadiet : Food Supplement Association, member of several national, European and international organizations).

ANSES published on 29 June its opinion on the risk assessment of the consumption of food supplements containing turmeric.

ANSES indicates that between 2016 and 2021, more than 1600 products containing turmeric or curcumin were notified to the authorities. (...) ANSES recalls the ADI (Acceptable Daily Intake) of curcumin of 3 mg / kg body weight / day. For an adult of 60 kg (and not 70kg, ndla), therefore, the maximum intake should not exceed 180 mg / day. Nevertheless, to avoid exceeding the ADI for consumers most exposed through the diet, the maximum intake of curcumin via dietary supplements should be positioned at 85% of the ADI, which corresponds to a maximum daily dose of 153 mg / day. In children, the maximum intake should be lowered to 74% of the ADI (...) ANSES maintains that these estimates were based without taking into account a change in the bioavailability of curcumin. Curcumin has a very low oral bioavailability, in this context, different techniques have been developed to increase its bioavailability. ANSES cites in particular the addition of piperine (however, the combined C3 Complex® and BioPerine® was used prior to15/05/1997, ndla), the inclusion of curcumin in a lipophilic matrix, encapsulation with surfactants or the administration of structural analogues. These different techniques allow an increase in bioavailability and make it 4 to 185 times higher. ANSES states that it is important to have safety data on these formulations that increase bioavailability. ANSES also reviews the status of these formulations, which can potentially be Novel Foods. (...) ANSES concludes that the intake of food supplements containing a maximum content of 153 mg/day does not raise any health concerns. Nevertheless, according to ANSES, this risk-free content is only valid for formulations based on conventional curcumin. This dose is therefore not applicable to formulations with increased bioavailability.

Novel food approved, up to 140mg

Curcumin C3 Reduct® is the hydrogenated derivative of the natural curcuminoids from Curcumin C3 Complex®, allowing to bring directly the active metabolites. After the positive opinion by EFSA on very last end of December, the authorization has just been published few days ago in the official journal (read the news of 21/07/2022 and its description).

C3 Reduct® allows to use the active form of turmeric curcuminoids, and move away from the myth of bioavailability. Colorless and highly stable, suitable for gummies, gels, bars, tablets, premixes etc…
Curcuminoids exert their effects through gastrointestinal as well as systemic routes. They are metabolized to Tetrahydrocurcuminoids (THCs), depending also on their bio-availability. Many ‘improved’ curcuma extracts include new technologies, new process or formulations with chemical, said to “improve the bio availability”, in the serum and sometimes to the detriment of the real bio-active forms. Besides, there’s the challenge to be considered as novel foods since they have been developed after may 1997.
C3 Reduct® overcomes the bioavailability limitation of the parent curcuminoids in the most functional way since directly providing the active metabolite. Research has shown that C3® Reduct is a remarkable antioxidant, superior even to curcumin itself in this respect. The beneficial impact of THCs on colonic health also has received strong scientific reports. THCs are also an excellent anti-inflammatory agent.
C3 Reduct®, which so contains directly the curcuminoid metabolites - THCs - has obtained Novel Food approval from the EFSA (end 12/2021, published 06/2022), daily dose up to 140mg. This may well be the first time a metabolite of a nutrient has been approved as a Novel Food.
It’s a Creamy-white crystalline powder (cf. easier cleaning of equipment), with a total content of 95% THCs, the hydrogenated derivatives of yellow curcuminoids (mainly curcumin, demethoxycurcumin, and bisdemethoxycurcumin) from the rhizomes of turmeric. Regular studies are performed with tetrahydrocyurcuminoids (last on november 2020: Efficacy for the Treatment of Canker Sore and Gingivitis).
In cosmetic, it brings a strong skin whitening, is found to have anti-inflammatory, antioxidant and tyrosinase inhibitory effects. Also against mycosis on skin, hair and nails (antifungal) - see our TetraPure.

Publication in English: COMMISSION IMPLEMENTING REGULATION (EU) 2022/961 of 20 June 2022 authorising the placing on the market of tetrahydrocurcuminoids as a novel food and amending Implementing Regulation (EU) 2017/2470 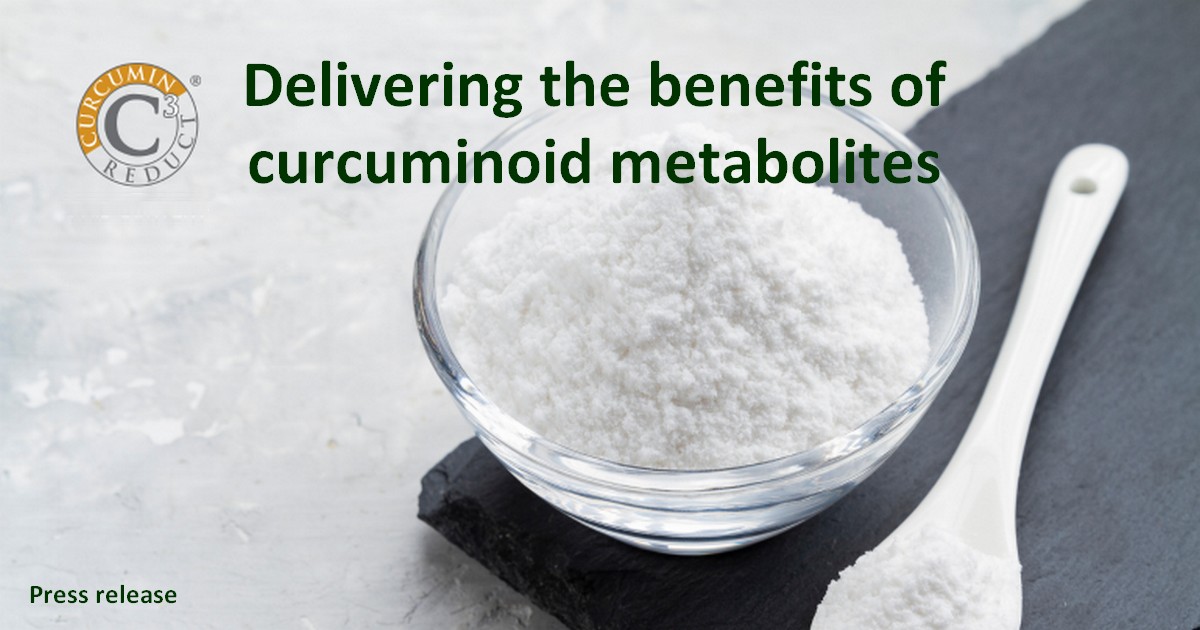 C3 Complex® - 'The Whole Picture and The Whole Truth'

The C3 Complex® has been on sale since the creation of Sabinsa in 1992. Evidence of sales before May 1997 in Europe is known.

Sabinsa has been manufacturing 95% Curcumin extract C3 Complex® since 1992 in their dedicated unit, in a continuous extractor, and analyzes the 3 curcuminoids from the early years in the COA in order to protect any risk of adulteration by synthetic curcumin (the confirmed absence of synthesis has been a plus for years at Sabinsa). A 95% extract includes curcuminoid (circa. 70-75%), demethoxy (circa. 15-25%) and bis-demethocy (circa. 2.5-6.5%). This has been patented by Sabinsa, as well as the solvent production method.

The Curcuma C3 Complex® is 100% composed of free curcuminoids (and not the sulphate or glucoronide forms, however more soluble and therefore more present in the plasma), these are the forms which the cells need to be able to produce the TetraHydroCurcumin then the Octa-HydroCurcumin. Plasma and cellular bioavailability can then be improved with Bioperine® (the cheapest and most effective route at present, sold prior to 05/1997), as well as newest routs as omegas, phospholipids, etc... The grade of Sabinsa is also the one with the lowest content of oxalic acid (potentially responsible for stones) and heavy metals.

Some advantages of the C3 Complex®:

It is the most studied with more than 70 clinical studies (and still ongoing studies) and more than 150 research papers. Most of the studies are available here. 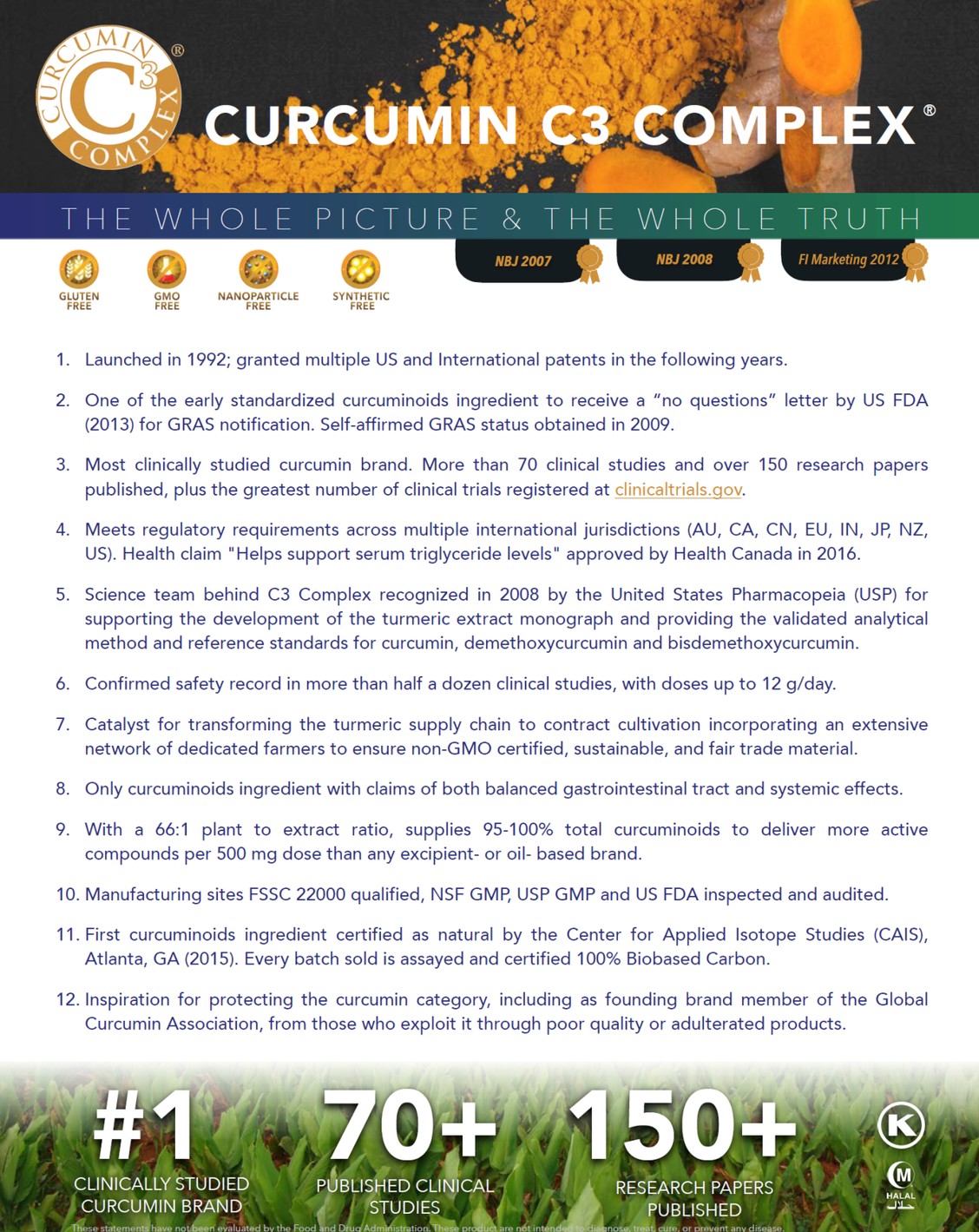