Novel food : The regulation authorizing the tetrahydrocurcuminoids C3 Reduct® has been published today, with validation of the 5 years protection 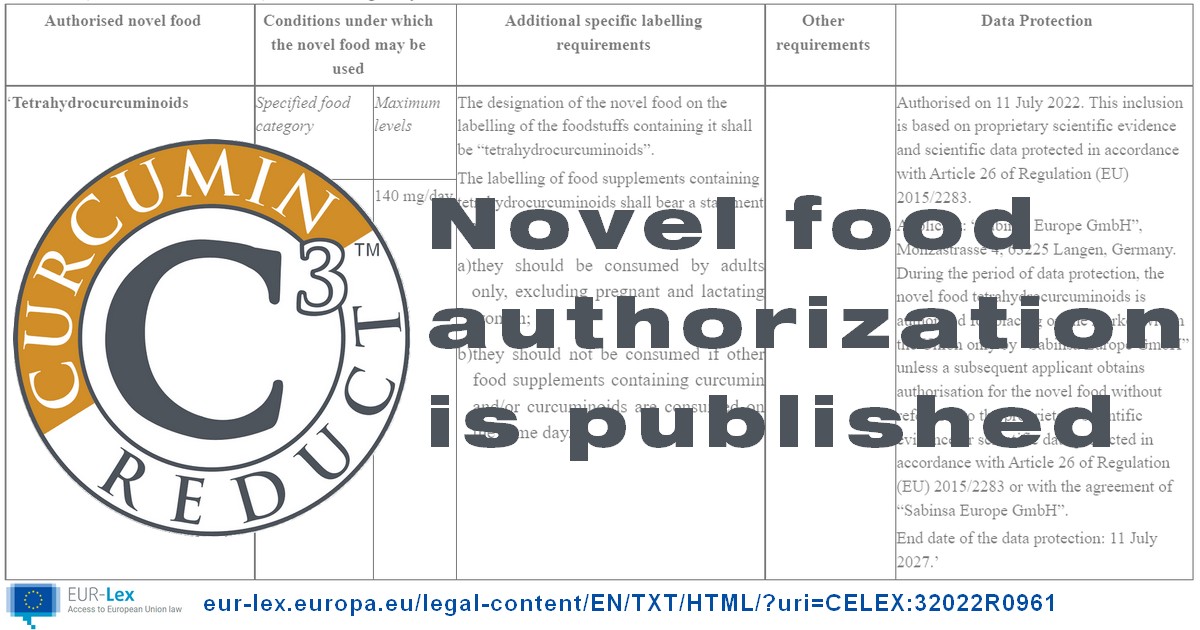 Curcumin C3 Reduct® is the hydrogenated derivative of the natural curcuminoids from Curcumin C3 Complex®, allowing to bring directly the active metabolites. After the positive opinion by EFSA on very last end of December, the authorization has just been published today in the official journal. Our C3 Reduct® by Sabinsa can so be lawfully on the market within 20 days.

It was speculated that the therapeutic effectiveness of Curcumin is limited due to its poor absorption in the body. Indeed, oral doses of Curcumin result in only traces appearing in the blood. In the last decade, much of the focus has been on enhancing  the absorption of Curcumin, for instance using the natural bioenhancer, Bioperine®.

In the last decade, THC, the major component in C3 Reduct® has gone through evaluation for  several pharmacological activities confirming its  position as the most important metabolite of Curcumin, but also  as a possible solution for overcoming the perceived   bioavailability problems associated with Curcumin.

Curcumin and THC are the major constituents (≥ 75% of the total content) of the turmeric and reduced (hydrogenated) turmeric preparations, respectively. Tetrahydrocurcumin has higher physiological and pharmacological activities than its parent compound. The therapeutic interest for THC lies in its low toxicity and its beneficial biological activities

Keeping in pace with the developing science on the turmeric and its active compounds, Sabinsa presents you the next generation of curcuminoids as Curcumin C3 Reduct®.