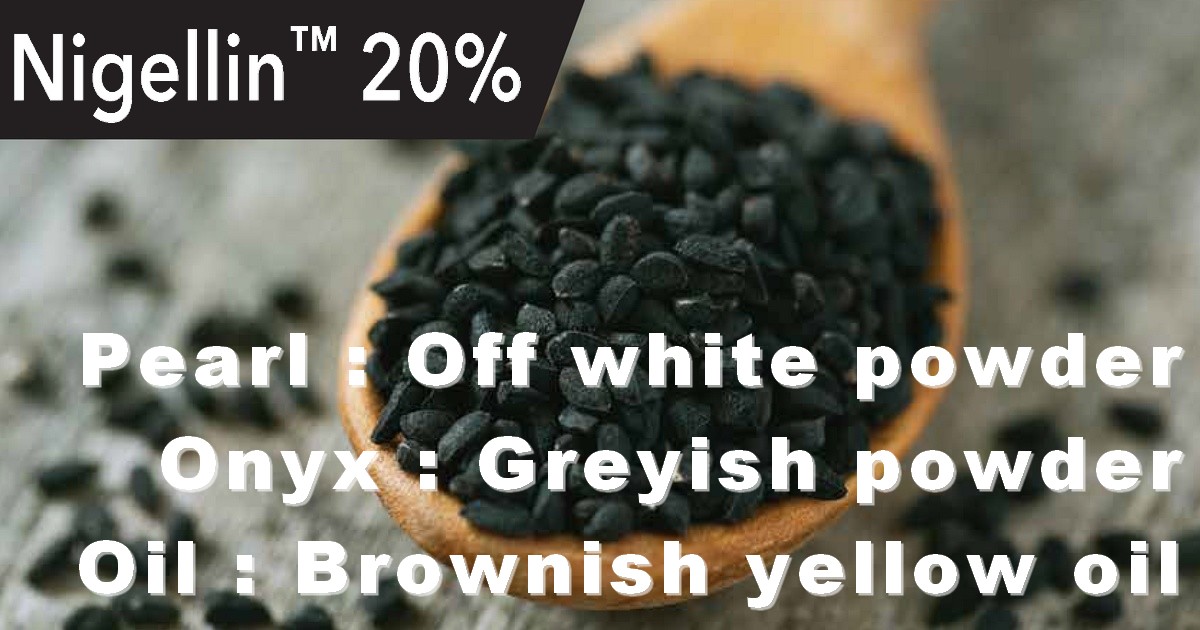 Nigellin® - The Most Revered Medicinal Seed for Health and Wellness Nigella Sativa, popularly known as "back cumin" is now available with a standardization of 20% Thymoquinone (TQ) by HPLC.

Sabinsa has improved upon the goodness of Black Cumin Seed by isolating the most active compound, and offers it in Amber (oil), Onyx (greyish powder) or Pearl (offwhite powder) grades.

Those three new grades complete the BCS range, initially standardized at 5% Thymoquinone (TQ) by HPLC, and are even more price attractive based on the assay.

"Extensive research has been conducted during the last 40 years further validating black cumin seed’s potential health benefits. Most encouraging are studies citing black cumin seed extract can support general functioning of the immune system, as well as brain, and liver health (Ahmad et al., 2013). The immune modulatory potential of the black cumin seed extract may be attributed to its constitutive bio-actives with inhibitory potential against inflammatory mediators release from human immune cells (T-lymphocyte and monocyte cells) as well as their bronchial dilation properties." Sabinsa says.

Recent research published in Frontiers of Pharmacology identified Nigellin™ BCS – Amber, Sabinsa’s Black Cumin (Nigella sativa) seed extract, as being the most effective of the 10 Nigella sativa(NS) extracts used in an in vitro study which suppressed the release of the most active cytokines and identified a prostanoid with inflammatory properties which may possess a favorable effect in the context of asthmatic conditions. Researchers evaluated 10 different NS extracts, and top ranked the extract provided by Sabinsa’s parent company and manufacturing arm, Sami Labs. It surpassed the second ranking extract in terms of the active constituent, thymoquinone (TQ), by more than 300%.